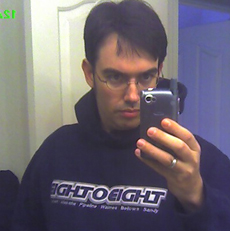 Steve Cooley
Steve Cooley has been involved in music since the early ’90s. He started out using trackers on i386 PCs back then, but has been using Macs for quite some time. Over the years he built his own analog synth (thanks to Paia), helped his brother ]]>]]>Deeje]]>]]> develop a dj application called ]]>]]>QTTurntable]]>]]> for Mac OS9, and now he’s even making music with his cellphone/pda/camera (pictured above). His current tools also include a G4 Powerbook, GarageBand, Reason, Renoise, and other various softawre and hardware. He even owns a near-mint Roland TR-808 that his dad found at a pawn shop for $25! Not only is he a musician, he’s also an excellent graphic designer, PHP programmer, and woodworker.