Words from the artist…
‘Velvetine’ – there are some strange days in one’s life.. One day
you’re on the top of the mountain and it seems like you could touch
the sky with your bare hand and give yourself a pleasure of ‘being
calm’.. But life has a mind and a way of it’s own.. And as such it
twists and turns up and down and takes you on the unforgettable
ride.. ‘Velvetine’ is a regular person… Nothing special about
him.. He had his risings and falls, but always managed to get up on
his two feet and get on with his life.. Concerning.. Having
problems as any other person does.. What’s so different about
‘Velvetine’ then? In his last fall he lost something.. Something
that he wasn’t able to buy off or try to get it back on force.. He
lost touch with his soul and is in deep search for the same. He
looked around the corners but has found nothing but other souls
(which others had lost..but..that’s their story..this one is about
boy named ‘Velvetine’). He’s not a hero or anything like it, even
tough he helps around and does his social part very well… Lost in
his confusion he felt into sadness.. Sadness lead him to loneliness
and loneliness to becoming a hollow man.. Traveling trough all
places.. even those imaginary… But still nothing… And still he
seeks his path..his soul… Walking trough the storm of thing
called ‘life’…

‘Luv-U-Luv-Me’ – chemistry.. that’s what people now-days say ‘love’
is.. Is it really chemistry or is it something far more deeper,
complex, on the ‘upper level’ of human understanding? On the
mention of the word itself people mostly get a little cold,
frozen… Is ‘love’ a taboo these days? Well; this is only an
intro to this story, the main event takes us to day after the
party. A girl meets a boy – a boy meets a girl.. They have
fun..they have a drink…they have ‘each other’.. After that, the
clock is still running, the sun comes out.. And they both go home,
alone.. – They get some sleep, wake up late at late afternoon and
remember what they ‘did’.. One phones another.. – They get to chat
about a lot of things for an hour or two.. About a lot of things
but not the one thing that made them be ‘one’ in that one special
(or maybe deceiving…) night. It’s the end of fist conversation
and both of them have ’something’ to say about last night but can
not say it before the other does.. Mostly this would go like
this..just with annoying silence.. But not this time.. They talk -
get it over with.. It was a one night stand, nothing else.. And one
of them feels very sad about it.. Which one..you ask? Listen to
this story and put yourself into any character.. Play it a few
times… Maybe you were/are on one or the other side, maybe both…
The story is ‘written’, but ‘you’ are the one that’ written it..or
are maybe still writing it…

‘Hurricane’ – a big storm, right? So, what’s the biggest storm in
your life? Don’t know about you but most people have a same storm,
a same ‘hurricane’ in their lives.. and that’s the life it self..
The trick is not to run away from it but to roll with it.. Fight it
when you’re strong wnough and even let it defeat you for a sec. or
so.. It’s not the matter of how many times one falls, but how many
times he risses again. Funny, but ‘Hurricane’ is actually an
‘anti-hurricane’ track.. It’s the one that tells you: “Yes, you ARE
having a bad day! Yes, you DO have many bills to pay!! No, you
DON’T qualify as the best human beeing that ever lived!!!” … So?
- Now what? Fight it.. With : love – faith – hope …
Cover art by ]]>60nine]]>. 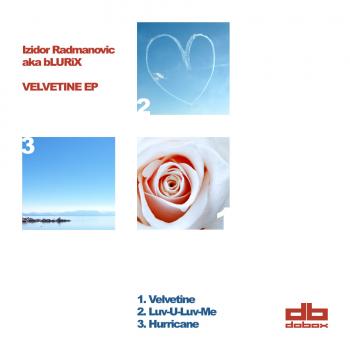